Although it was never officially on the market, a luxurious Los Angeles property sold for a whopping $ 70 million, one of California’s most expensive home sales in 2021, to Abel Tesfaye, the Canadian music superstar best known as The Weeknd. As first reported by The Wall Street Journal, the “Blinding Lights” singer now has the deed to an approximately 33,000-square-foot mega-mansion on the first floor of Bel Air, a size substantially larger than his previous Hidden Hills home, which was sold to Madonna in April for $ 19.3 millions.

According to property records, the sellers of the Bel Air home were married to Dutch celebrities Reinout and Danielle Oerlemans, he the founder of television production company Eyeworks and she a former professional cyclist who once dated Lance Armstrong. The couple purchased the existing home in the summer of 2015 for $ 21.4 million and subsequently completed a three-year overhaul that added 13,000 square feet of living space, plus an indoor pool / spa and a host of other dazzling amenities. The couple also transformed the vaguely Tuscan mansion from the early 2000s into a contemporary spectacle with modern furnishings selected from around the world.

Spread across 1.6 acres overlooking the Bel Air Country Club, on an ultra-private, island-like parcel of land, the home welcomes you with double doors and a long driveway. Inside, The Weeknd will enjoy a Turkish-inspired hammam, movie theater, gym, and separate music studio.

A formal living room has bright orange walls and a soaring black marble fireplace, while an industrial-style office and formal dining room have coffered ceilings; Almost all living spaces open through floor-to-ceiling glass walls to an outdoor living room and terraces with picturesque views of the golf course.

There’s also an elegantly renovated gourmet kitchen outfitted with high-end appliances, a duo of waterfall-edge marble islands, and copper drawers and cabinets trimmed with custom handles crafted from leather belts. The meticulously landscaped grounds are home to everything from a sports court to an infinity pool with a waterfall. 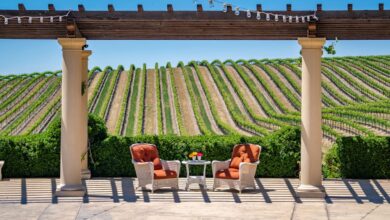 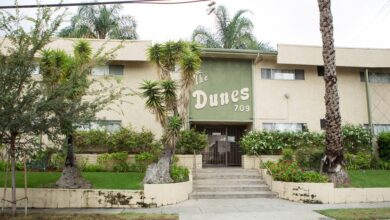 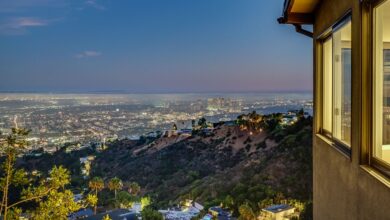